Basketball in Tenerife - details of the island's professional team

Basketball in Tenerife is only part of a nationwide participation in the sport with two professional leagues covering the whole of mainland Spain and its islands. 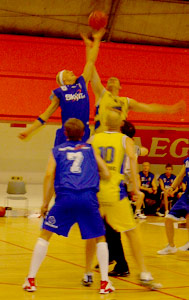 The top league is called ACB and, in its present form has been in existance since 1983. Tenerife has no basketball teams in this league at the time of writing (2011), although a club formed from players from the whole of the Canary Islands, Club Baloncesto Canarias, enjoyed that honour throughout the 1980s. The second league is called Liga Española de Baloncesto, or LEB. It is divided into two categories, Gold and Silver. Tenerife has one professional basketball team in this league. Officially named Club Balconcesto Tenerife (CB Tenerife), it generally operates under the name Tenerife Rural.

This club has only been in existence since 1996 and was formed from several Tenerife teams with the objective of competing at a professional level. Although things obviously change, year to year, it tends to occupy the middle position of the LEB league. Its best performance to date earned it a brief spell in the top league, in 2003.

The team currently fields five players actually from Tenerife, with three others from the neighbouring island of Gran Canaria. The rest of the squad is made up of players from the USA, Cuba and Venezuela.

CB Tenerife play their home games at Pabellón Insular Santiago Martín, which is in La Laguna. Opened in 1999, it can accommodate 5,100 people.

These other teams are generally all based up in the Santa Cruz area and many offer junior "leagues" and coaching:

If You Want to Play Yourself

Many sports centres and gymnasiums will feature a basketball court. Also, these days, many schools and colleges offer opportunities for learning and playing basketball in Tenerife.