The Auditorio de Tenerife, or Tenerife Auditorium, is a remarkable building situated by the ocean in Santa Cruz. Built between the years 1997 and 2003, it was designed to be a general cultural centre and is now regarded as one of Tenerife's most famous tourist attractions and is the venue for many serious and popular cultural activities. 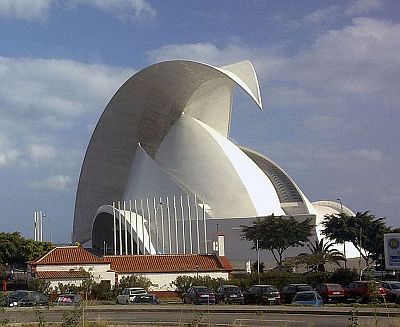 Designed by top Spanish architect Santiago Calatrava Valls, it has received a little criticism for being similar to Sydney Opera House. Nevertheless, its iconic design has proved a big attraction to residents and visitors alike. It was opened by the third son of the king and queen of Spain, Felipe de Borbón, Prince of Asturias and has since been visited by Bill Clinton (the first time a former US president has been to the Canary Islands).

"The Main Hall" is the area you find yourself in when you first enter the building. An enormous space of about 13,000 square feet, it has huge wooden doors that can be opened to integrate this space with the outside. With superb views out onto the Atlantic Ocean, it can accomodate exhibitions and such things as car shows.

"The Symphony Hall" is a huge concert venue, with impeccable acoustics. A unique curved space, arranged in amphitheatre style, it covers an area of over 4,000 square feet and is used by such luminaries as the Tenerife Symphony Orchestra. The boast is that there is 100% visibilty of the stage area from anywhere in the stalls.

"The Chamber Hall", with an area of around 1,600 square feet, is a much more intimate venue, situated at the "pointy" end of the building. Even with its smaller size, it has impeccable standards of acoustics and seating.

There are several other, smaller areas, with various functions and for storage.

There are two Terraces attached to this building.

The "Atlantic Terrace" and the "City Terrace" can both be used for social gatherings such as banquets and are open-air spaces of over 4,000 square feet.

They can accommodate up to 350 people.

There is also the "Tradewinds Plaza", a huge open-air terrace of some 175,000 square feet, with superb views of the Atlantic and the city of Santa Cruz. 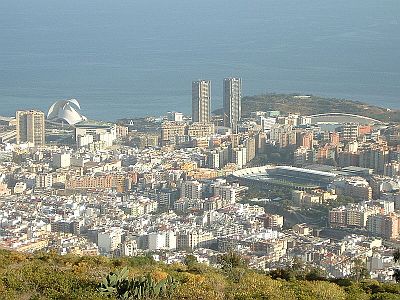 As well as being the venue for concerts by the Tenerife Symphony Orchestra, the Auditorio also stages other events, such as the Tenerife Opera Festival, the Canary Islands Music Festival, "Tenerife Danza" and Atlantic Jazz. 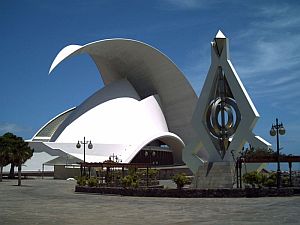