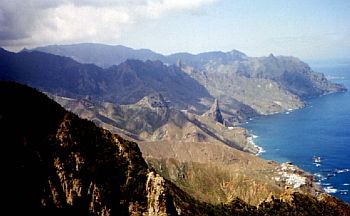 This photo gives you some idea of the sort of terrain you can expect in the Anaga region, situated in the far northeastern tip of the island.

There are many potential cycle routes in this, often, desolate area. Here are just three suggestions.

You start off from La Laguna by taking the TF-13 road in a northeast direction. As you're reaching the outskirts of the city, you'll see a sign saying Taganana bearing off to the right, the TF-12. You should take this.

You are then on this TF-12 road for a good while. It will lead you gradually out of populated areas into the countryside. It is a gentle climb which will slowly become steeper, as you approach the mountains.

Once you're into the forest, the road really begins to climb and becomes very winding. You'll eventually enter the Anaga Rural Park, a protected area and, soon after, you'll start to get spectacular views. There'll be occasion viewpoints where you can stop to admire them.

Keep going and the next landmark is Cruz del Carmen, a sort of crossroads, where, amongst other things, there is a bar/restaurant, where you can make a quick pit stop.

Not long after this, you'll come to a junction, with Pico del Ingles (TF-114) off to the right. Take this and it will take you up to a viewing point, at a height of nearly 3,500 feet. Thereafter, retrace your route back down and rejoin the TF-12.

More of the same, for a good while. Then, you may be presently surprised to find the road descending a little. Watch out for a sign saying Taganana (TF-134) to the left and take this. There's a little bit more climbing to do, then, after the tunnel, a very nice, long descent into Taganana, where one of the first things you'll see is a Bar/Restaurant!

You can make this village your destination, but there is an option to carry on along the TF-134 to the tiny hamlet of Benijo. This part of the route hugs the coastline and is pretty level.

This route covers just over 80 miles and can take up to six hours. It is classed as hard.

You start this route exactly the same as the previous one, getting yourself onto the TF-12. Once again, you stay on this road for a good while, passing Cruz del Carmen and Pico del Ingles. What you should watch out for, this time, is a really weird junction, where the road branching off to the left practically turns back on itself.

It's signposted Roque Negro and Afur (TF-136) and you should take this road.

You'll then be on a very pleasant descent along a winding, largely deserted road, taking you into Afur.

I warn you now, Afur appears to be in the middle of nowhere and consists of a church, a restaurant and a few houses. At least you'll be able to get a bite to eat!

This route is just over 60 miles and can take up to five hours. Its difficulty level is classed as moderate.

Round Trip, With Detours

So called because it is a circular route returning you to your starting point, this includes one detour, taking you to the beautiful valley ofBatan de Abajo, plus two other, optional ones.

Once again, you leave La Laguna on the northeasterly TF-13, only this time, do not turn off onto the TF-12. Carry on a short while on the TF-13, then turn right. This is just after a sign for a car workshop on the left, bearing the BP logo.

You'll now be on the TF-141 and this takes you to the village of Pedro Alvarez. You'll eventually arrive at a junction with a small church opposite and you should turn right here.

This road (quite makeshift in places) will take you up into the forest wilderness. After a good few twists and turns, you'll arrive at a sign forLos Batanes, to the left. This is the non-optional detour. Take this and it will take you along a winding path through forests and open spaces, with spectacular views of both the coast and the mountains. At its end, you won't find much, but at least there's a bar!

Retrace the route and join the original road, signed Las Mercedes/La Laguna/Taganana (TF-143). Carry on a good while along this and, eventually you'll come to a junction, where you should join the TF-12, by turning left (signed Taganana/Cruz del Carmen).

Next, you'll come to your optional detours. There'll be a sign to the left for Las Carboneras/Chinamada/Taborno (TF-145). This road takes you a little off the beaten track to the quaint Tenerife village of Las Carboneras. Retrace your route and you'll see a turnoff to the left, signed Taborno (TF-138). This is your second optional detour. It takes you to another picturesque village and this one has great views.

This, then, takes you back towards La Laguna and you'll eventually reach the roundabout where the TF-12 branches off the TF-13. Home at last!

This route covers over 50 miles and lasts up to 5 hours. Its difficulty level is classed as moderate.