Tenerife UFOs - why so many?

Tenerife UFOs! If they exist at all, the island is said to be once of the best places in the world for sightings of these supposedly extraterrestrial craft.

It is said that one reason for this is the powerful magnetic field generated by Mount Teide (magnetic fields are produced by seismic activity and that's one thing Teide has a lot of).

A major Tenerife UFO sighting was in 1976. It lasted over 40 minutes and was also observed in La Palma, La Gomera, Grand Canaria and by a ship at sea. Several hundred people testified that they had witnessed it, including military personnel. 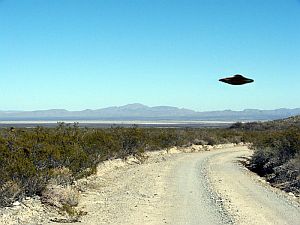 The 1976 incident began at 9:27 in the evening on June 22. The first reported sighting came from a Spanish Navy vessel, positioned just off the coast of the neighbouring island of Fuerteventura. It consisted of a strange yellow light that gave off no radar signal. After a while, it changed into a "rotating beam".

Its light could be seen reflected off the water. This was witnessed by all ship's crew. Eventually, it split into two, both sections speeding off in opposite directions. Land sightings began a few minutes later, with reports from Grand Canaria, followed by Tenerife, La Palma then La Gomera.

That same evening, a certain Dr Francisco Padron Leon was travelling by taxi from Guia to Las Rosas, in Gran Canaria. Suddenly, the taxi was stopped by a glowing blue sphere hovering close to ground in front of them.

Dr Leon described it as being about 100ft in diameter. He could see two occupants, at some sort of console. They were dressed in red and about 9ft tall.

In due course, the sphere rose into the air and set off in the direction of Tenerife. All this was corroborated by the taxi driver and several residents of Las Rosas also saw it.

The incident was given such promenance that the Spanish Air Force conducted an enquiry into it. They considered such things as:It was decided that none of these possible explanations fitted. A conclusion was reached that the observed object was "unidentified" and the incident was "unexplained".