Tenerife Insects - some of the more exotic ones!

Tenerife insects. Anyone who lives on, or has visited Tenerife knows that the island has more than its fair share of flies, midges and cockroaches, but this page is more concerned with the more exotic species to be found within its boundaries.

If you've never heard of this insect, it's not some strange, hybrid creature from a horror movie. No, it's a thin-bodied, double-winged insect a bit similar to the dragonfly. 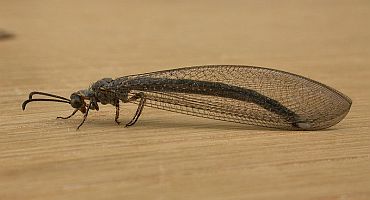 The "ant" part of the name comes from the fact that its larvae eat ants. Once at the adult stage, ants and suchlike are still caught and consumed, but pollen and nectar are also included in the diet.

These adults are feeble flyers, being seen around at dusk and at night. They are partial to desert areas and, if they land on you, they can deliver a painful bite.

A damselfly is a creature that looks very much like a dragonfly, but is a distinct, separate species.

The Saharan damselfly is the sub-species found on Tenerife. They prey on small insects, which they scoop from the air, or off leaves, using all their legs. For breeding, they prefer places where there is water - whether it is fresh or stagnant. The main way to distinguish them from dragonflies is to observe them at rest. They fold their wings into their bodies, whereas the dragonflies leave their wings open. 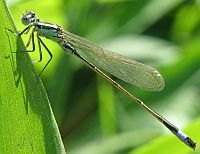 There are several types of dragonfly on Tenerife, but two are particularly the most common and may be easily spotted. 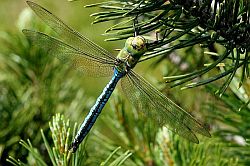 The Emperor dragonfly is a large example of the species, with adult males able to grow up to three inches in length. They are powerful creatures and will climb to quite high altitudes in search of food. Diet can include butterflies and tadpoles. Preferred habitat is near water and the male is aggressively territorial.

The Scarlet Darter, or Scarlet Dragonfly, has, as its name suggests, a bright red body.

They tend to perch on a stick, reed or stone, close to water, suddenly darting off to catch some food, then settling back again. 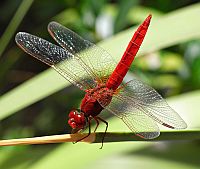 This is a large species of praying mantis found on Tenerife. 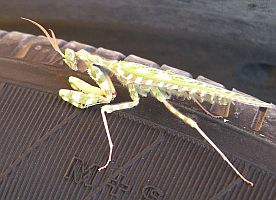 These are predatory creatures and feed on such things as aphids, fruit flies, grasshoppers and caterpillars. When there are none of these items available, they just resort to eating each other!

They reside in areas of vegetation and have a camouflage ability, like the chameleon.

Here are two species of butterfly observable wild in Tenerife.

The African Grass Blue is a pretty creature that, unlike many of its cousins, has continued to thrive despite the spread of human habitation. 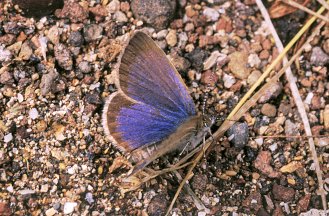 Indeed, they can actually be seen around the flowering plants and shrubs in the garden areas of hotels on the island.

The Monarch is a quite well known species and is easily spotted throughout the island. 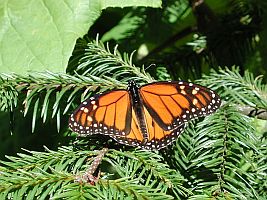 It, too, can be seen fluttering around the exotic plants of the island, feeding on their nectar.

Amongst the species of moths found on Tenerife is the Death's Head Hawk Moth, a large specimen that is quite famous. 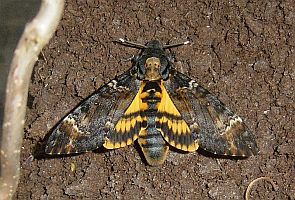 This is a migrant species and feeds on plants such as nightshade, potato, yellow sage and tulip trees. It also has the strange habit of raiding bee hives to steal honey!

The subject of much superstition through the ages, because of the skull design on its back, it is also famous for being used in the publicity photo for "Silence of the Lambs".

The Vine Hawk Moth is also found on the island. It gets its name because its caterpillar feeds extensively on grape vines. 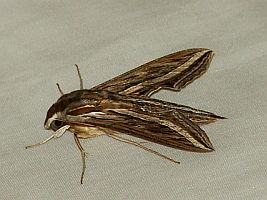 Due to this, they are disliked intensely by farmers, who fight them with insecticide, yet sufficient caterpillars survive to emerge into adulthood as moths to keep the species going.

Also called the "Leaf-legged Bug", this insect is so-called because of the extensions on its hind legs. If you check the photo, you'll see that they do look like leaves. 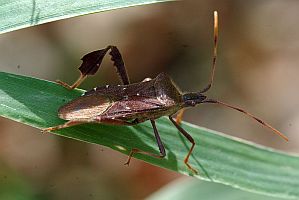 The creatures dwell in tropical or sub-tropical areas, so Tenerife is ideal for them. They can cause considerable damage to crops, so are intensely disliked by farmers.

More properly known as the Western Conifer Seed Bug, this insect originated on the southern Pacific coast of North America, but has gradually spread worldwide. 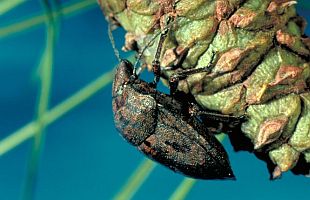 The species feeds on the sap from developing pine cones. In Tenerife, it has a large potential feeding ground in the pine forests around Mount Teide.

It is considered a minor tree pest for this reason.

A type of fly and a nasty one at that. It will attack other insects, such as beetles, butterflies, moths, bees, wasps, ants, grasshoppers and spiders. It's not fussy, is it? 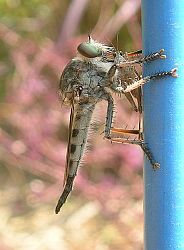 You'd think, from this, that the robberfly would be some gigantic, monstrous predator, wouldn't you, but the creature is quite small, not much bigger than a common fly.

In similar fashion to common flies, the insect lays its eggs in rotting matter, such as compost, or dung heaps, or rotting logs.