Why is the Tenerife flag the same as Scotland's? 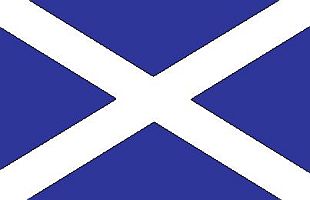 The Tenerife flag, as you can see, seems to be the same as the Scottish one. There are several possible explanations for this. I'll leave you to decide which to believe.

1. They are the same, because Scotland and Tenerife share the same patron saint - Andrew, or, as he's known on the Canary isle, San Andres. The story has it that the saint arrived on the island just as the new wine was being produced. Andres was keen to make a good impression with the locals and took part in the celebrations with gusto, ending up a little worse for wear. While in a drunken stupor, the local children played a joke on him, tying pots and pans to his clothes. Whenever he moved in his sleep, they made an almighty clatter, waking him up. The children, no doubt, thought this extremely funny, but I doubt that San Andres was amused.

Nowadays, on the eve of his saint's day, November 29th, local children collect tin cans of all shapes and sizes, tie them together and drag them through the streets in his honour. Quite commendable, but it don't half make a racket!

2. They are not the same at all, as the two backgrounds are slightly different shades of blue. (That one's quite boring, isn't it?)

4. In 1797, the British Navy attacked the port of Santa Cruz, Tenerife, led by Rear-Admiral Nelson. Unusually for one of the finest battle tacticians of his day, Nelson, along with his fleet suffered a humiliating defeat. The flag, a white saltaire on a navy blue background, was captured from one of the ships and eventually adopted by the victorious Tinerfeños as their own.