Tenerife Dog Breeds - all three of them

Tenerife dog breeds. As anyone who has been to Tenerife will know, the island is full of dogs, so much so that, a few years ago, it was a serious problem, with stray and feral dogs being rife.

These days, the stray problem has been alleviated somewhat, but the kennels run by the animal charities are still full to bursting point.

Back in the late 90s, there were many dogs to be seen, displaying the facial characteristic of protruding bottom teeth and I used to wonder if they were an actual Tenerife native dog breed. Since then, these dogs have tended to disappear and I'm assuming that this feature was as a result of in-breeding.

As far as I can gather, there are three breeds of dog associated with Tenerife or the Canary Islands - and there's a real odd one out!

The bichon frisé is quite a famous breed and its name is French for "small, fluffy dog", which it certainly is! There is a variety of this breed called the bichon Tenerife and, from that, you'd expect it to be a true, indiginous dog of this island. It's not as straightforward as that, however. There are some assertions that all the Bichon breeds originated in Tenerife - but that is not a definite fact, merely a theory. 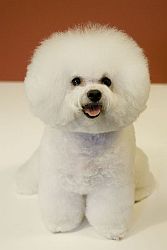 At any rate, there are four types of Bichon: Maltese, Bolognaise, Havanese and Tenerife and they did originate in the Mediterranean area.

These days, this cheerful little dog is still very common on the island whose name it bears.

No, that's not a joke name, there really is a dog breed called this and it couldn't be more different than the Bichon. 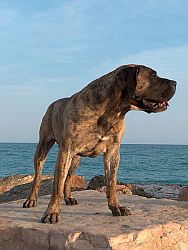 "Dogo" is a Romance Language word for the molosser, a breed of large, thick-set shepherd dog, similar to a mastiff. This dog appears to be a true indiginous species of Tenerife, with records of them having been used by peasants as guard dogs and to work the fields as long ago as 50BC.

They can be aggressive, suspicious of strangers and, because of their strong character, are difficult to train if not caught early enough.

In the 18th century, dogfighting became prevalent on the Canarian archipelago and these dogs were naturals. The breed flourished, until this barbaric sport was banned in Spain and, by about 1960, the dogo canario breed came close to dying out.

A decade later, an initiative was launched to re-establish the breed. It was slow, but successful and, today, once again, the dogo canario is flourishing.

This is a true indigenous breed of the Canaries. It has been speculated that it was brought over by the islands' first human settlers, probably from Egypt and North Africa.

These days, it is chiefly used as a hunting dog, usually for rabbits. 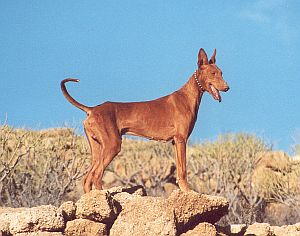