Tenerife Birds - both exclusively endemic to the island and some visitors

Tenerife birds. There are many species, some completely endemic, some that are found on the island, but also elsewhere in the world.

Here, I'll list a selection. If any ornithologists know of any others they feel should be included, by all means contact me and I'll remedy the situation. 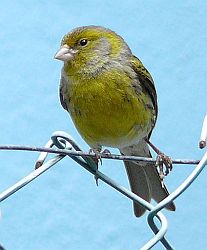 Also known as the Atlantic Canary, this small bird is endemic to the area known as Macaronesia. On Tenerife, they can be spotted in the pine forests skirting Mount Teide. It is a gregarious bird, often found in groups and two of them may pair off to establish territory. It feeds generally on plant seeds and small insects. 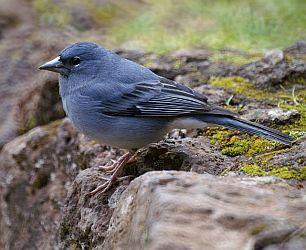 This attractive, small bird is also found amongst the pine forests of the island, preferring altitudes of 1,100-2,000 metres. They eat primarily pine seeds, yet feed their young insects. Breeding between May and July, they will usually find a tree fork in which to build their nest.

There are two pigeons endemic to the Canary Islands, the Bolle's pigeon and the laurel pigeon. They inhabit the laurel forest areas between 500 and 1,000 metres, which are often shrouded in mist, making the birds very difficult to spot.

The Bolle's pigeon is named after the German naturalist, Carl Bolle, who was the first to recognise it as a separate species from the laurel pigeon. The distiguishing feature that sets it apart is the presence of dark bands on the tail, plus dark grey plumage. 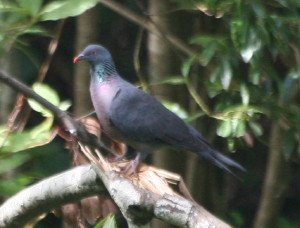 The laurel pigeon, on the other hand, has brown plumage. Both species build stick nests in a tree and usually lay just one egg. 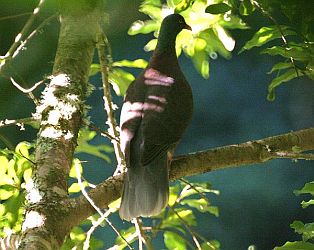 This tiny bird is endemic to the islands of Tenerife and La Gomera, inhabiting both the laurel and pine forests, but preferring the latter. There are other goldcrests populating the other Canary Islands of La Palma and El Hierro, but these are now recognised as a distinct sub-species, the Western Canary Islands Goldcrest.

Their Latin name, regulus, means "little king" and, because of this, the bird may also be known as a Kinglet.

Because of their tiny size and fast metabolism, they have to constantly feed on their diet of insects, even when building a nest.

A goldcrest deprived of food would die within the hour. 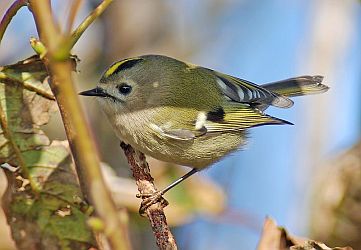 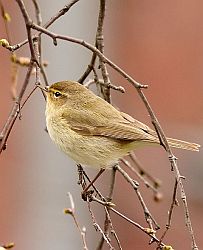 This bird is endemic to the Canary Islands and is a species distinct from the common chiffchaff. It has a distinctive song and is found both near developed areas and remote hillsides. 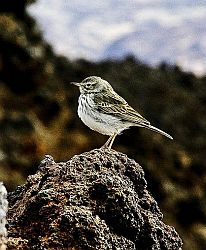 This small, undistinguished bird is found not only on the Canary Islands, but also Madeira. It favours open country rather than the pine or laurel forests and nests on the ground. It is named after the French naturalist Sabin Berthelot, who, at one time, lived on the Canary Islands.

Blue tits can be found throughout Spain and Portugal as well as the Canary Islands and North Africa.

It is generally considered that the Canary species is separate from the mainland Europe one, being termed, in Latin, cyanistes teneriffae. This is further divided into sub-species for the seven islands, the one on Tenerife having, therefore, to be designated cyanistes teneriffae teneriffae. These small birds can be quite slow moving and therefore are easy prey for sparrowhawk. The birds lay their eggs around April and May and there may be as many as eight in the clutch. 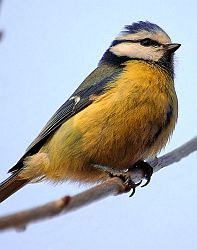 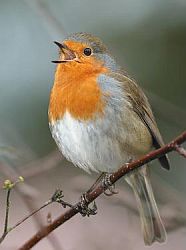 The robin is prevalent throughout Europe and Asia and there is a sub-species endemic to Tenerife. They hunt for food both by day and night, feeding generally on worms, spiders and other insects - although at certain times of year, this diet may be supplemented with fruit and berries. The species is generally unafraid of humans or large animals and males can become very aggressive when another male invades its territory, launching a vicious attack, often to the death. They make their nests anywhere where there is a sheltered hole. Thus they may be found in all sorts of items discarded by humans. A clutch of eggs may number as many as six.

This species of woodpecker is found throughout Europe and northern Asia, but a sub-species, dendrocopos major canariensis, is endemic to the Canary Islands. It frequents forest areas, using its woodpecking technique to forage for food in the bark of old trees. Diet consists of insects, grubs, seeds and fruit. The bird will also eat eggs, young hatchlings and small rodents, should the opportunity present itself. They nest in trees, invariably those that have soft wood. How they distinguish these softwood trees is unknown. Clutches of eggs, numbering as high as seven, are laid at the end of May. 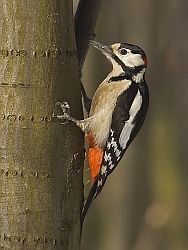 Like some of the other birds further up the page, the kestrel can be found in many areas other than the Canaries, in this case southern Europe, Africa, North and South America. The subspecies found in Tenerife, falco tinnunculus canariensis is a small bird of prey whose habitat can stretch from the coast right up to the mountainous regions. They're not fussy about where they live either! Forest areas, open areas, rocky cliffs - they don't care. It is well-known that the kestrel is also called the windhover and they can often be seen hovering motionlessly in the sky. 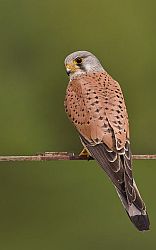 Usually, kestels eat small mammals, such as voles and mice, but on Tenerife, where such things are not really available, their diet consists mainly of small birds.

They nest usually on rock faces or cliffs, but sometimes in tall palm trees. Eggs are laid towards the end of May and may number between three and seven.

There is a sub-species of gull, larus michahellis atlanits that inhabits the islands of Macaronesia.

It is its yellow legs that distinguish it from the herring gull.

These large birds typically frequent coastlines and, being omnivorous, scavenge the beaches and harbours, plus any rubbish tips they can find, for food. They are not averse to stealing food from other birds, too.

Breeding usually in colonies, they lay their nests on cliff ledges or on ground level and males will aggressively defend them.

Eggs are produced late March to early May and clutches usually consist of three. 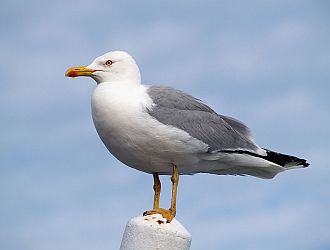 These birds populate southern Europe and Africa, which includes the Canary Islands. The Tenerife version is lanius meridionalis koenigii and this sub-species tends to prefer an open, dry habitat.

The diet consists of large insects and small birds. They like to take the prey they have killed and impale it on thorns to save for later!

They are quite rare, so constitute a valuable sighting for birdwatchers.

This bird is found throughout the Mediterranean area, plus Scandinavia and Britain. There is a specific Canary Island sub-species - motacilla cinerea canariensis.

These birds tend to prefer areas near running water for nesting. A typical clutch in the Canary Islands is no more than four eggs.

Because of their proximity to water, they feed on aquatic insects, plus small crustacea and molluscs.

When these birds have established a nesting area, they tend to return to the same spot year after year. 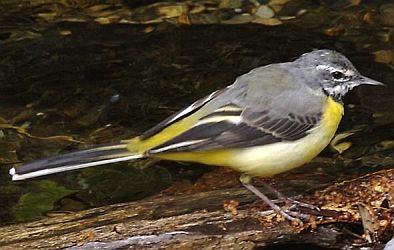 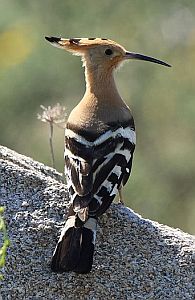 Although not a true indigious species of Tenerife, this bird is worth a mention just for its striking appearance. Found throughout Southern Europe and parts of Africa, the subspecies found in Tenerife has the Latin name upupa epops epops. You can see from the photo its interesting head adornment, which is made up of feathers that can be opened out in much the same way as a cockatoo. They are monogamous birds and nest in holes found in trees or walls. Their diet consists mostly of insects, but can include small reptiles. As a lot of their meals rid the environment of creatures that humans consider to be pests, they are, in many parts of the world, a protected species.