Will Teide erupt? It's difficult to think of it spewing out red-hot lava when you see it draped in a beautiful blanket of snow! 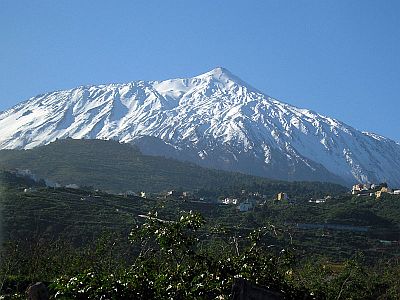 "El Pico del Teide" (the Peak of Teide) is the name of the actual volcano found at the top of the mountain. The original inhabitants of Tenerife, the Guanches had a name for it - "Echeyde" [your idea of the pronunciation is as good as mine] - who was supposed to be some sort of mystical, powerful being who held up the sky.

Teide and its neighbour, Pico Viejo (old peak) are both stratovolcanoes. Teide is the higher, at just over 12,000 feet. Indeed, it is the loftiest peak in Spain! 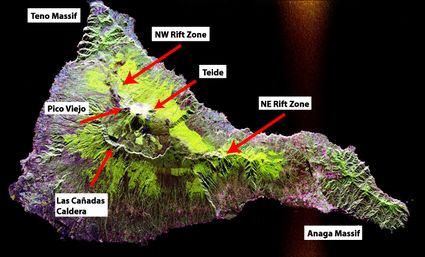 Subsequently and more recently, material spewed from the Teide-Pico Viejo stratovolcanoes and partially filled in the caldera. Teide is, you'll be pleased to note, currently dormant. However, don't get too complacent, for Teide is still considered to be "unstable".

Let's look at the years in which previous eruptions took place. 1492, which was reported by Christopher Columbus, as he sailed past Tenerife on his voyage of exploration to find the New World, 1706, 1798 and, most recently, 1909. Does something strike you? Aren't all the dates around the turn of the century?

In recent centuries, the eruption causing most devastation was in 1706, when the town of Garachico was completely destroyed.

The last time Tenerife experienced any volcanic activity was 1909, when Montaña Chinyero erupted and spewed out a lava flow, which began to head for the town of Santiago del Teide and the villages La Mancha and Tamaimo. People left their houses and fled to the coast. The story goes that, in a last, desperate course of action, villagers from La Manchas took holy statues to the edge of the lava near their village and prayed for divine intervention. It appeared to work, for, soon after, the lava ground to a halt, leaving the threatened town and villages untouched. There is now a monument and cross to mark the spot where the "miracle" happened.

Further up the page, I pointed out that eruptions have tended to occur around the turn of the century. Well, we're now well into 2016 and it now looks like Teide might be waking up after a bit of a lie-in.

On the afternoon of Sunday, October 2nd, around 92 micro-earthquakes were recorded over a four-hour period. They happened in a line extending south-west from Teide, taking in the regions of Adeje (a major tourist area) and Vilaflor. The fact that most of these were several miles underground makes seismologists fear that a volcanic eruption is possible.

The Instituto Volcanologico de Canarias (Involcan) is a body set up specifically to monitor seismic and volcanic activity across the whole of the Canary Islands. They have sent a team to check on the situation, following the "seismic swarm", as they called it. They are also checking for heightened presence of carbon dioxide in the atmosphere around Teide, which is a precurser to volcanic activity. Tenerife will have to wait for the results. Meanwhile, some encouraging news comes from the National Geographic Institute, which maintains that the recent earthquakes are not connected to any volcanic activity. Fingers crossed, then!