Tacoronte - an unspoilt area of Tenerife - with wine!

Tacoronte is not only a city, but also a municipality of Tenerife. Located in the north-east of the island, it is mostly rural. Covering over 11 square miles, the municipality stretches from the volcanic peaks in the centre of the island right down to the Atlantic shore.

The area of Tacoronte is known as a major wine producing region and its reds are considered world class. Vineyards and farms surround the actual city, where you can find many old manorial houses.

Although most of the municipality still consists of farmlands, much of the population has shifted from rural to urban and, in recent years, tourism has become an important industry.

The town was founded, after the Spanish Conquest, by the Portuguese Sebastián Machado, around the hermitage of Santa Catalina that he had built. The place grew during succeeding centuries and in 1911, Alphonse XIII granted it the status of “municipio.”

Where the hermitage used to be now stands the Church of Santa Catalina, which is well worth a visit, along with another fine example of traditional Canarian architecture, the Casa de la Alhóndiga that dates back to the 17th century. This has been modernised and converted into an exhibition and conference centre.

Every March, Tacoronte holds its own "mini" Carnival. A brief celebration heralding the start of Lent, this cannot hope to compete, of course, with the big one in Santa Cruz, but shouldn't be overlooked, nevertheless. 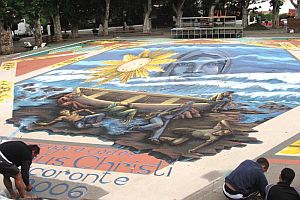 In June, the town, together with several of its neighbours, celebrates "Corpus Cristi", which involves the locals going out and collecting volcanic sand of lots of different colours from the surrounding areas and creating "sand carpets" of unbelievably intricate designs in plazas and on roads.

The main road through the town has a selection of shops and businesses but if you go off the beaten track, down the side streets you will find many more places of interest, including a theatre.

There is an agricultural market, called “El Mercadillo”, that takes place on weekends on the outskirts of Tacoronte along the road to Valle Guerra.

There are plenty of restaurants to be found, with several of these being Chinese. One particular restaurant stands out.

It's not every restaurant that can boast that members of the Spanish royal family frequent it when they're in the area!

Situated on Carretera General del Norte, this five star restaurant is an absolute gem in the middle of nowhere.

Its decor is elegant and conservative, the tables adorned with fine linen, china and silverware.

Nestling in a rustic setting, it specialises in fresh fish and seafood.

As well as the main restaurant, there is also a terrace for al fresco dining. Private rooms are also available.

Evening meals are served from 6pm onwards. Reservations are recommended.

For a taste of north Tenerife, you could do worse than visit the municipality of Tacoronte.

This page needs more photos. If anyone has any they would care to donate, I'd be very grateful.