The "Spanish Lisp" - where did it come from?

The "Spanish Lisp". You know when you're watching a cookery programme on TV and the chef is working with "chorizo"? The Spanish sausage? And how amusing it is to listen to the wierd and wonderful pronunciations they have for it? There's "choreezo", "horeezo", the excellent "horeetso" (touch of German there) and the most authentic, "choritho".

And there we have an example of the so-called "Spanish Lisp". 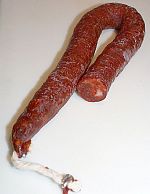 Just call it a Spanish sausage

A legend has grown up that this "lisp" started when the Castilians were ruled by King Ferdinand in the 13th century. He was supposed to have had a lisp, so his courtiers, in deference to him, started lisping, too. (Amazingly enough, the King didn't think that everyone was taking the mickey, which was quite fortunate.) This lisping habit eventually passed through to the general population.

It's all a load of bunkum, in reality.

The "th-" sound was to represent "c" and "z" and is a sound completely distinct from "s".

The reason this lisping sound isn't found in Tenerife pronunciation is that the Canaries have their own dialect. It is called "Canarian Spanish". They would pronouce "chorizo" as "choreeso".

As a one-time Tenerife resident, I ended up speaking what little Spanish I knew with a Canarian accent. It's a lot better (and easier), in my opinion, than all this "th-" business.

Another pronunciation tip: the letter "v" is pronounced like a "b". Don't ask me why.