Spain Political Parties - the two main ones and all the others

Spain political parties. Although the country has two main parties, there is also a bewildering array of other parties that have representation in a small way in the Spanish Parliament.

Like many other democracies, Spain has two major political parties and elections usually result in one of the two gaining power.

El Partido Socialista Obrero Español, or the Spanish Socialist Workers' Party, has been in power since 2004.

As the name suggests, it is a party dedicated to representing workers and may be likened to the UK's Labour Party.

Formed in 1879, it describes itself as a centre-left, social-democratic, progressive party.

In June, 2018, a general election was held and this party retrurned to power, ousting the one mentioned next.

El Partido Popular, or the Popular Party (also known as the "Peoples' Party"), in its present incarnation, was formed in 1989, after an earlier version, called the Alianza Popular, or Popular Alliance, dating back to 1976.

It describes itself as conservative/liberal and, therefore, is a bit similar to the UK's Conservative Party.

This office is actually called El Presidente del Gobierno, which literally means "The President of the Government". The actual, Spanish translation of "Prime Minister" is Primer Ministro, but this tradition of calling the head of Spain's government Presidente dates back to the reign of Queen Isabel II, in the mid-19th century. This is despite the title being a little misleading, making it appear that Spain is still a republic. 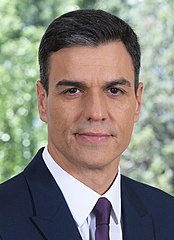 Photo: Ministry of the Presidency. Government of Spain. 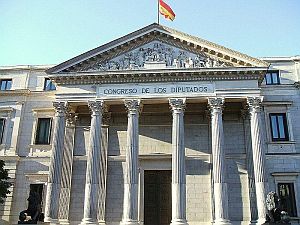 Elections take place every four years and the most recent one was in November 2011, when the PP won a landslide victory. They and the PSOE make up most of the 350 seats in the Congress of Deputies, with the PP now having a majority of 75. A handful of other seats are held by sundry other parties.

After the big two, the CiU is the next most represented in Congress, with 10 seats. The initials stand for Convergència i Unió, which means "Convergence and Union". Formed in 1978, it is a Catalan nationalist party and is conservative/liberal.

Next, with six seats, is the Partido Nacionalista Vasco, or "Basque Nationalist Party".

With three seats, there is the Esquerra Republicana de Catalunya, or Republican Left of Catalonia, a left wing party in support of independance for Catalonia.

There are three parties with just two seats, the Izquierda Unida, or "United Left", which is a coalition, but communist dominated, the Bloque Nacionalista Gallego, or Galacian Nationalist Bloc, another coalition calling itself a "patriotic front" and the Coalición Canaria, or "Canarian Coalition", a liberal party that, at present, governs the Canary Islands and Tenerife.

Two more parties have just one seat each - Unión Progreso y Democracia (Union, Progress and Democracy) and Nafarroa Bai, which is Basque for "Navarre Yes", another Basque Nationalist party. 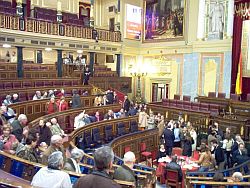