The Sitio Litre orchid garden is a charming attraction, found in Puerto de La Cruz. It consists of an 18th century mansion with a garden that is open to the public. The name comes from the Spanish for "site" - sitio, plus the name of the original owner, Archibald Little. Over the years, "Little" sort of metamorphosed to "Litre" (pronounced "lee-tray"). In the mid-19th century, the property was purchased by a certain Charles Smith, connected to Bristol college and his family owned it up to 1996. 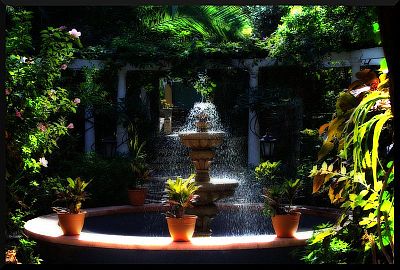 The garden has had many famous visitors over the years, such as Agatha Christie, William Wilde, the father of Oscar and the explorer (not the actor) Richard Burton.

There are a couple of noteable areas:

This doesn't mean that it's the "north terrace", dedicated to someone called Marianne. It's a terrace dedicated to the botanical artist, Marianne North, who lived in the house for a couple of months towards the end of the 19th century. Some of her paintings can be seen in the garden and, if you visit Kew Gardens in London, you'll see over 800 examples of her work.

This area is dedicated to the famous German botanist and explorer, Alexander von Humboldt. Impressing even Charles Darwin with his scientific travels, he loved Tenerife so much, he expressed a desire to live there. Despite everything else he had seen on his worldwide travels, he maintained that nowhere in the world was there a landscape as beautiful as the Orotava Valley.

The Sitio Litre features a selection of some 350 different orchids, which is the biggest on Tenerife. The beautiful gardens also feature bougainvilla, hibiscus, fir trees and an ancient dragon tree, which, although not as old as the famous one in Icod de Los Vinos, is, nonetheless, impressive.

The house is still used by its owners, shown by the presence of a hammock, barbecue and a lawn containing a set of croquet hoops. Visitors may avail themselves of a souvenir shop and a bar, with outdoor seating.

All in all, a very pleasant place to spend a couple of hours.