The Pyramids at Guimar - not as ancient as you might think

The Pyramids at Guimar, famous in Tenerife, are a popular attraction on the island. Unlike most of the other pyramids dotted all over the world, however, they are not particularly ancient. They have been dated to as recent as the 19th century. 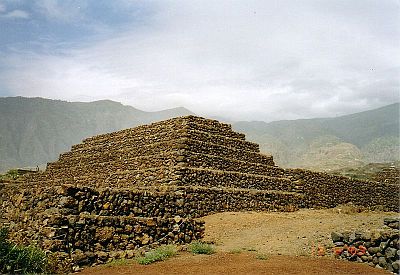 I suspect that, like me, you thought that this collection of step pyramids was of quite ancient origins, like the Egyptian pyramids at Giza, several millennia old. There is actually much controversy surrounding the actual date of the construction of these artefacts.

In 1990, an article appeared in the Tenerife newspaper, "Diario de Avisos", all about "real pyramids in the Canaries". It was read by the explorer Thor Hayerdahl, a man who had much interest in how ancient civilizations possibly connected with each other. His famous "Kon Tiki" expedition was launched in pursuit of such things.

As Heyerdahl had long postulated a link between the Egyptian pyramids and those of the Maya civilization in Central America, the story on the Pyramids at Guimar piqued his interest and he relocated to this area in north-east Tenerife. He established a permanent residence at the pyramid site in 1994 and remained there until his death in 2002.

This is where the controversy comes in. Heyerdahl maintained that the pyramids were of ancient origin. Between 1991 and 1998, excavations were made and analysed. The pyramids were in three distinct layers. The earliest layer contained shards of pottery that were estimated as being from the 19th century.

In the site's exhibition, it is worth noting that no mention is made of the conclusion of the excavation and the concept of a connection with the Guanches is suggested. 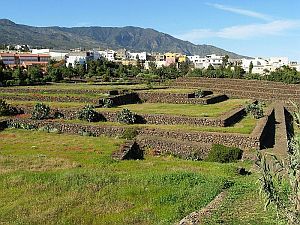 Apparently, these pyramidal structures were once liberally dotted around the whole island of Tenerife, but, over the decades, were systematically dismantled to use as cheap building materials. The Guimar pyramid site originally contained nine structures, but now, only six remain.

Housed in a restored, traditional Canarian building, the museum presents exhibitions of, amongst other things, step pyramids from around the world and the method of construction involved in the Guimar ones.

Built partially underground, this feature shows a fifteen minute film every hour, all about the pyramid site and featuring information on Thor Heyerdahl and his many varied expeditions. Commentary available in six languages. 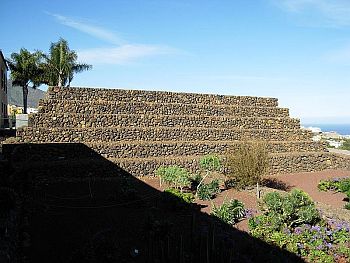