Puerto de la Cruz was originally a port serving La Orotava and, to this day, has a permanently busy harbour. Tourism started in Tenerife at the end of the 19th century, with the main areas being Puerto and Santa Cruz. 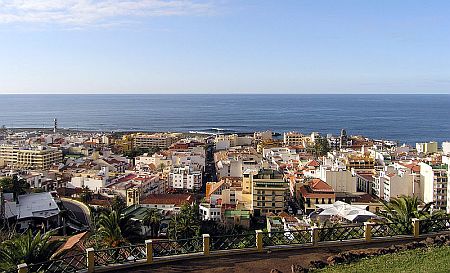 Nowadays, it is Tenerife’s main holiday resort in the north of the island. It has resisted the temptation to remodel itself in pursuit of the tourist euro and still remains pure Canarian in character. 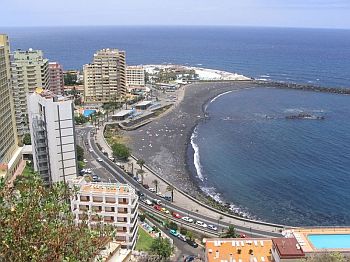 This has resulted in its being a touch more sophisticated than its counterparts in the south, with many fine restaurants, elegant plazas and streets and upmarket shopping. It is also blessed with a picturesque garden beach.

Many tourists from the Spanish mainland can be found here in the summer and it is a favourite with inhabitants of Nordic countries during winter, when they visit to enjoy the mild climate.

Towns in north Tenerife usually receive more rain than the south, but, because Puerto de la Cruz nestles at the foot of the La Orotava valley, it is sheltered from too much precipitation, yet has enough to maintain its lush, green surroundings. This, coupled with more sunshine than its neighbours, explains the presence of so many beautiful public gardens in its environs. It is, in short, an ideal climate.

November and February normally bring the most rain. The summer months of June, July and August are usually cloudy, but hot, due to the trade winds. The winter months of December and January enjoy clear skies and sunshine, but cooler evening temperatures. The best months to visit are September and October, when you are almost guaranteed long hot days with warm nights.

In the La Paz district, a ten minute drive from Plaza del Charco in the centre of town, you'll find the awesome Botanical Gardens, containing exotic flora from all over the world. The unique climate of Puerto is ideal for some of these tropical plants.

Things to look out for include the "drunken tree" (palo borracho), that sways like someone the worse for alcohol. Check out the "sausage tree" (arbol de las salchichas) that bears fruit looking extremely like those meaty treats. Another amazing specimen is the huge, 200 year old Higuera, with aerial roots speading over most of the garden.

Entrance is under 5 euros - well worth it!

Despite its name, this is an English owned garden and its style reflects this. It also houses the largest collection of orchids on the island.

A water garden situated next to the Hotel Taoro, it features waterfalls and ponds on different levels, connected by footbridges. Draped in bougainvillea, these pretty gardens ring with the sounds of insects and are heavily populated by dragonflies and butterflies. 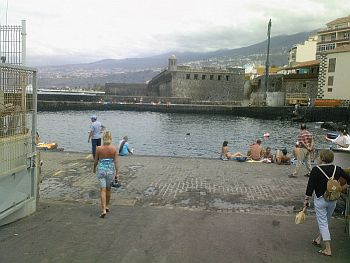 Even today, the harbour area remains extremely busy, with an abundance of picturesque fishing boats berthed there.

You'll find many food stalls, all serving traditional Canarian food, plus a giant pan of paella being prepared next to the fish displays.

During fiestas and the carnaval, the harbour is full of drinks stalls and churro bars, to cater for all the partygoers who flock there.

Twice a year, the harbour area is visited by a fairground and, once a year, a circus.

This 17th century church, one of the most beautiful in Puerto de la Cruz, is found in the Plaza de la Iglesia, opposite the Monopole Hotel. Its lavish interior is something to behold.

This is a swimming pool complex comprising seven pools, including a huge artificial lake with an island at its centre.

For refreshment breaks, the complex offers a selection of bars and restaurants, plus snack bars and kiosks.

The complex is situated next to the casino and, at night, all the pools are underlit and the pathways are lined with tiny lights making for an awe-inspiring sight.

3.50 euros will secure you entrance for a full day and this will include the use of a sunbed and mattress.

This is Puerto's main beach and runs from Punta Bravo right across to the west end of town, at Castillo San Felipe. 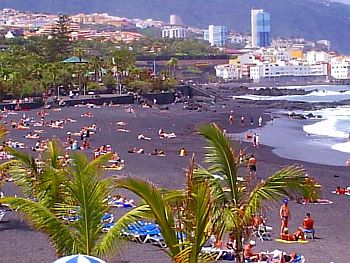 Its name means "garden beach", because it is backed by garden areas, including one devoted to cacti. As for going in the sea, the waves can be a bit high, but, provided the red flag isn't flying, it's safe enough.

There is a self-service restaurant there, plus toilets, showers and changing rooms.

Puerto de la Cruz is also the home of "Loro Park", Tenerife's premier zoo. With various animal shows throughout the day, including the famous one featuring parrots, this is a must for a family day out.

The restaurant district of Puerto de la Cruz is situated in the old fishing quarter, in an area known as "La Ranilla". Here you can find Canarian and Italian cuisine, with superb examples of fish and other seafood.

More and more establishments are opening all the time, making for a bewildering array of possibilities for your evening dining. Many elegant and sophisticated eateries now line the cobbled streets, offering anything from classic Spanish dishes, through to nouveau Canarian, via Mediterranean and even vegetarian!

Restaurants worth a try include:

Once again, you are able to take advantage of Tenerife's duty-free status to obtain very cheaply priced goods.

Check out Centro Comercial Martiánez for designer clothes and shoes. Shops and boutiques can also be found on Calle de Hoya and around Agustín de Bethencourt.

A short taxi ride will take you to the famous Al Campo complex, which is a huge shopping mall, similar to the ones in the UK and USA. There you'll find a profusion of shops dedicated to fashion, shoes, jewellery, lingerie and sports wear, plus Spanish designer outlets such as Zara and Stradivarius.

Puerto de la Cruz has many clubs, mostly along Avenida Generalísimo. They usually start buzzing around 1:30 in the morning. There'll be a charge of between 4 and 6 euros to get in. A tout outside will either take you inside or give you a ticket and, once in, you'll get a complimentary shot of some undisclosed alcohol.