The Pico del Teide - a must-do trip up the mountain 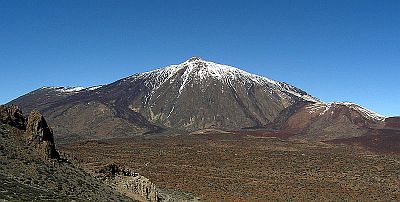 For the visit to the Pico del Teide, you need to get yourself to the cable car station, Teleférico del Teide. The journey there is an adventure in itself and can be made by car, tour bus, public bus, or, if you're really fit, on foot.

If you elect to go by bus, then TITSA operates some services that do the journey.

By car, you take the TF-21 road from La Orotava to the north and Vilaflor to the south. From La Laguna, take the TF-24 and from Los Gigantes, the TF-23. 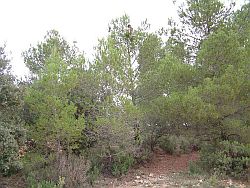 Whether you are in a bus, coach or car, you'll find yourself initially being driven along windy mountain roads, going ever higher. Ears will pop! The road takes you through the pine forests and large pine cones are everywhere! There are pine cones on the trees, pine cones lining the road and pine cones littering the road.

Subsequently, in much the same way as an aircraft does during its initial climb, you'll emerge from the clouds into bright sunshine. You'll start to notice small pockets of snow here and there and, should you get out of your vehicle, you'll find it's pretty cold. 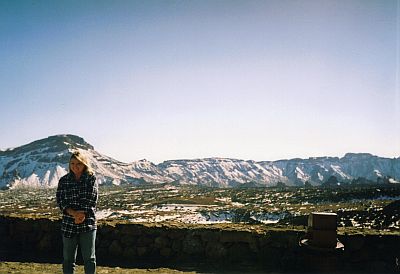 My other half, Alison, looking decidedly cold

Your first stop on the way to the Pico del Teide might be the Parador de Cañadas del Teide, found on the TF-21 road. This is essentially a hotel positioned right next to Teide and is an oasis of luxury nestled amongst the mountains. You can imagine the view from its windows! I can't tell from its website if its amenities, such as the bar and restaurant, are open to non-residents, but if you want to check it out yourself, click here. 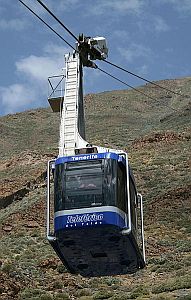 A few miles further along the TF-21, you'll come to the cable car station, known as La Rambleta. There's ample parking and you'll also find a sourvenir shop, a bar and a restaurant.

Here, you can buy tickets for the journey up the final bit of the mountain. (It's not taking you to the actual summit, but more of that later.) The cable car can only accommodate a maximum of 35 people and, as this is a very popular attraction, there can be very long queues. Should the weather be a bit unsuitable, with strong winds, say, then the cable car will not run.

Its first departure for the day is at 9am. The last upward trip is at 4pm, with the final downward one is 5pm. 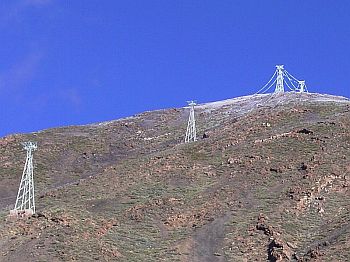 The La Rambleta departure point is already at an altitude of about 7,730 feet. If you've queued and obtained your ticket, the eight-minute cable car ride will take you up a further 670 feet, where you'll find viewing platforms.

You're not at the summit yet! There is an access trail to it, called Telesforo Bravo, which is yet another 650 feet, but it's not a free-for-all for everyone to scramble up. Over the years, the area's natural ecosystem has become in danger from the presence of so many tourists and the National Park Administration authority decided to restrict access to the actual Pico del Teide to people who have obtained a special permit at least eight days in advance.

This permit is free and valid for one day only. If, by any chance, the trail is closed on your chosen day due to bad weather, the permit may be used the following day instead. There are two ways to get it. You can go in person to the office in Santa Cruz. The address is:

It is open from 9am to 4pm, Monday to Friday and you need to take a photocopy of your passport with you.

The other option is probably far easier, as you can apply online.

When you take the trail, you must keep precisely to the marked out path and there are rangers lining the route to make sure you do. They come armed with whistles and will toot them angrily if anyone deviates from the path.

As for the crater of Teide, there is no access allowed whatsover, under any circumstances.

Halfway up Teide, there is a spot where climbers can make an overnight stop-off. Called the Altavista Refuge, it has basic amenities, such as a kitchen, an infirmary and three dormitories, accommodating up to 60 people. Stays are restricted to one night only.

You can make a reservation in person or by telephone at:

Please be aware of the altitude of Pico del Teide. The air is thin and the final walk to the summit should not be attempted by people with breathing or heart problems.

Whatever the season, it's going to be cold up there, so take some appropriate clothing. 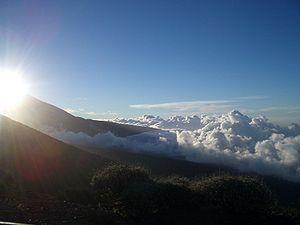