The Nelson Arm Mystery - did it end up in Gran Canaria?

The Nelson arm mystery. There is a story that the amputated arm of the Rear-Admiral is hidden behind the altar in the cathedral of Las Palmas, Gran Canaria. It was during the attack by Nelson's fleet on the harbour of Santa Cruz, in 1797, that a burst of grapeshot hit the right arm, resulting in a compound fracture and a severed artery. The ship's surgeon amputated the arm immediately. But how did it get to Las Palmas, some 90-odd miles away?

This question is the reason why the story is probably just a rumour. Why would the British surgeon give the Nelson arm, which would have been regarded as a trophy, to his enemies? Why was it transported all the way to a neighbouring island? Why would a strictly Roman Catholic cathedral allow it to be put below its altar anyway? That honour was reserved solely for saints. Although Nelson was considered one of the finest military strategists of his day, a saint he certainly wasn't.

Nevertheless, the story has never been refuted, but, unfortunately, is unlikely to be true.

Back in Tenerife, there are symbols of the battle that are real. In the Plaza de España, Santa Cruz, there is a monument dedicated to the island and people of Tenerife. It is supposedly marking the actual place where Nelson was shot.

In the Military Museum of the Canary Islands, called Almeida Fort, you can see the actual gun (called "tigre"), which was supposed to have hit Nelson, thereby hastening his defeat.

Anchors from one of the ships sunk in the battle were recovered and can now be seen in front of the Navy Headquarters and Santa Cruz harbour, at the crossroads of Avenida de Anaga and the Ramblas boulevards. 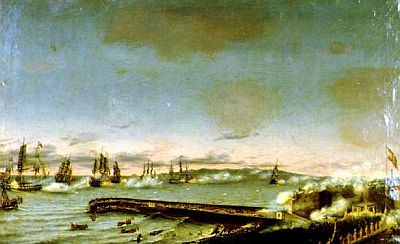 For the people of Tenerife, Nelson has always been respected as a gentleman, honouring to the letter his terms of surrender. So much so, a street was named after him. In a nice residential district of Santa Cruz, you can find "Avenida Horacio Nelson". Despite his having attacked their island, the Tinerfeños display to this day an enduring affection for the man.