Los Silos is an extremely picturesque village found on the northwest coast of Tenerife, in an area known as Isla Baja, which means "low island". It nestles in the foothills of the Teno Mountains, amongst a profusion of green vegetation. 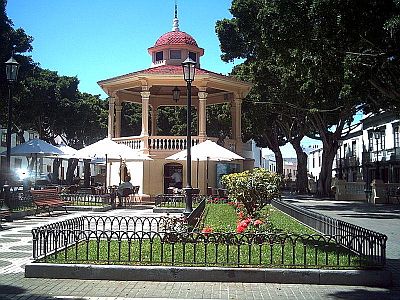 The place seems to have been established throughout the 15th century, when the communal activity was growing and storage of cereals. Three large silos were constructed to this end and it was thus that the village got its name.

With the equally picturesque villages of Garachico and Buenavista del Norte on either side, it is as far away from the cliched tourism of the southern resorts as you can imagine. It has attractive plazas and traditional buildings lining cobbled streets.

Most websites refer to Los Silos as not being a holiday destination, as it has no hotels. I've managed to find one, however and there are also a few "casas" and "fincas" where visitors can stay. You'll find details below. 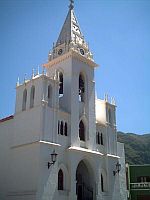 This is a beautiful - fairy-tale, even - 16th century church. Predominantly white in colour, it truly looks like a cake that's been iced! By comparison with most other churches, its inside is very airy and open to natural light, showing off its collection of statues and altars to good effect.

Noteworthy amongst the statues is one known as "The Christ of Humility and Patience", one that is reproduced in many Tenerife churches. This one dates from the 17th century and, remarkably, still has the original paint!

Adjoining the church is this 17th century convent, containing a small visitors' centre. There you can find much information about the village, including guides to the various walks available in the area.

This building is found in the town square and, if you go inside, you'll find, on the first floor, a precious work of art - the Martyrdom of San Sebastian - a Gothic artefact displayed in an enclosed balcony.

A relatively recent feature, found on the seafront, this is a full whale skeleton displayed on a stand, apparently dedicated to marine conservation.

Although the village is not really a tourist destination, there are places to stay - mostly farmhouses of varying degrees of luxury, plus one bona fide hotel.

Found on the Avenida Sibora in Los Silos, this two storey, four star hotel has 35 rooms and 14 suites.

The stylish restaurant offers gourmet dining in the evening and also provides a breakfast buffet.

Other facilities include an elegant, cosy bar to relax in over a drink, plus a swimming pool, whirlpool and spa.

This luxury version of a farmhouse is found out in the countryside a short drive south of the village.

It features six standard apartments and three de-luxe ones.

Other facilities include a restaurant, barbecue area and a solarium.

Regardless of whether a village is a tourist destination or not, it will always have a good selection of bars and restaurants and Los Silos is no exception.

Two places worthy of note are:

Yes, you read that right! Every year, at the beginning of December, story tellers from all over the world descend on Los Silos to participate in the Festival. Taking place in the village's Plaza Nuestra Señora de la Luz, it is an interesting thing to go and see, even if all the stories are in Spanish!