Meaning "The Royalists", the name dating back to the time of the Spanish conquest, Los Realejos is found in the north-west of the island, nestling on the slopes of the Tigaiga mountain range next to the Orotava Valley. This was, indeed, the place where the final surrender of the original Tenerife inhabitants, the Guanches, to their Spanish invaders took place in 1496. Today, it is an unbelievably picturesque village, with around 37,000 inhabitants and, at a pinch, could be considered a suberb of Puerto de La Cruz. (Its proximity to that prominant tourist centre makes it handy for such attractions as Loro Park, a large zoo and Lago Martianez, a water park.)

One of the striking features of this charming village is its extremely steep streets. This is because it consisted originally of two seperate villages and these areas are known today as Alto (upper) and Bajo (lower). 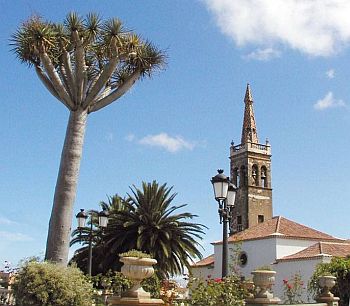 In the upper part of town, you'll find an example of what Tenerife is famous for - a picturesque church. This building, with its distinctive spire, is the Church of Santiago and is where the defeated Guanche kings were baptised (whether they liked it or not) into the Christian faith.

In the lower part of town, you'll find the historic "Old Quarter", which still features many traditional buildings from the 16th and 17th century and a pretty church square. If you thought it was only Icod de Los Vinos that had a Dragon Tree, think again. Los Realejos features a whole host of them, including, at the entrance to the square, a pair called Los Gemelos (the twins).

The coast near Los Realejos has to be one of the most stunning on Tenerife and a magnificent walk is to be had, starting at the San Pedro viewpoint, leading, via palm groves and luxury houses, to a small ancient fort, San Fernandez, which was used to ward off pirate attacks in the 16th century. Such is the beauty of the area around the village, nearly 50% of it is protected by law.

Los Realejos boasts a fine beach, El Socorro, that has been awarded the Blue Flag. There is ample parking and a nice beach bar. 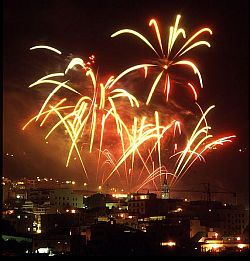 The town holds a celebration called the "Dressing of the Crosses" every May 3rd. Two rival firework factories provide the ammunition and two rival areas of the town try to outdo each other. The resulting display lasts up to three hours!

At the same time of year, El Socorro beach hosts the Flypa International Paragliding Festival, which lasts over four days, featuring air displays by paragliders from all over the world, plus beach parties and Latino music from top bands.

Up at the top of the village is a former monastery which has been lavishly restored and is now a luxurious holiday complex called Meson El Monasterio. Because of its altitude, there are stunning views and the complex boasts no less than five restaurants where you can appreciate them.

A restaurant specialising in sea food, with traditional dishes such as paella.

It features an extensive wine cellar with quality vintages.

For all you meat lovers. Try the steaks cooked on the hot stone. With an extensive tapas menu, this restaurant can cater for large groups.

A family restaurant ideal for group bookings, this eatery specialises in fondue dishes.

There is also a selection of homemade desserts and cakes.

Open from morning (for breakfasts) to late at night.

An haute cuisine restaurant featuring, on its menu, such mouthwatering delicacies as tenderloin in Burgundy wine, duck breast with cherry sauce and monkfish skewer.

There is also a selection of homemade truffles and chocolates.

Open all day, featuring, in the mornings, a champagne breakfast.

El Mirador boasts a terrace eating area offering unbelievable views over the La Orotava valley all the way to the Atlantic Ocean. 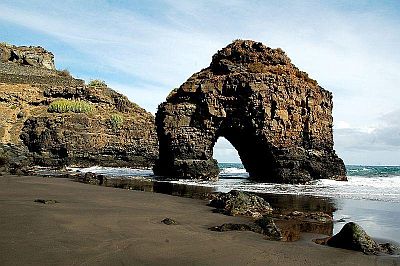