Las Galletas Tenerife - a tranquil town on the south coast

Las Galletas Tenerife is a small town on the south coast that is out-and-out Canarian. Okay, there are a few examples of tourist accommodation, but, for the most part, it is inhabited by natives. 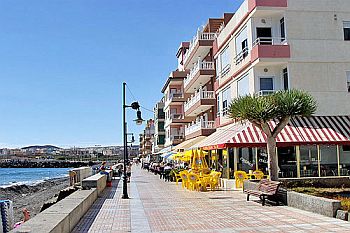 For this reason, it is a far more laid-back, tranquil town than the main tourist ones, further along the coast.

Its name, in translation, means "the biscuits", of all things and originated from an occurance in the 19th century, when a merchant ship carrying a cargo of biscuits was shipwrecked just off the coast, allowing its contents to wash up on the shore. The inhabitants then were imaginative, weren't they!

Today, Las Galletas is a thriving fishing port, with a harbour and pier and there is a fish market (lonja de pescado), where fishermen set up makeshift stalls to sell their catches, fresh from the sea.

The town does get its share of tourists and holidaymakers, in a small way. For them (and, of course, the residents), there is a modest beach, which can be quite rocky. It has limited amenities, but there are showers available.

The promenade running along it, as you can see from the photo above, is a very pleasant affair and, as the town never gets too crowded, neither does this walkway - a far cry from the main tourist towns.

Las Galletas also has an impressive collection of shops. Many of them are run by Venezuelans and Cubans, making for a very cosmopolitan air.

The streets are arranged in a sort of grid formation and are generally one-way. There is also an extensive pedestrianised area. 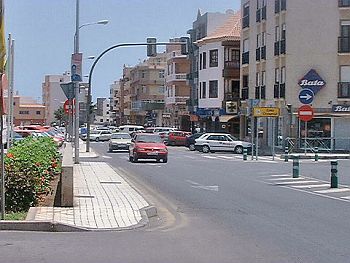 Las Galletas is a quaint, tranquil town and, being just about still indicative of the true Tenerife, well worth a visit.