La Matanza - a picturesque town in the north

Up on the north coast of Tenerife, you'll find the municipality of La Matanza de Acentejo and the town of La Matanza is its main town.

The municipality's name literally means "the slaughter of Acentejo" and refers to the time when the Spanish conquerors were attempting to take over the island from the indiginous people, the Guanches.

Originally, the area known as Acentejo was part of the Guanche kingdom of Taoro. It was an area the Spanish were keen to subjugate and many battles were fought amongst the mountainous landscape and its ravines.

A major turning point in the favour of the Guanches came in May, 1494, when a troop of soldiers, led by Alonso Fernandez de Lugo, entered a ravine, known today as Barranco de Acentejo, only to find heavy earthenware objects raining down on them. In a pre-arranged strategy, the more primitive Guanches managed to rout a collection of 150 horsemen and 1,500 infantry.The troops were forced to withdraw, leaving some of their comrades dead.

This incident resulted in the creation of the town of La Matanza - "the slaughter".

Today, this quiet, picturesque town is situated within breathtaking mountain scenery and, for the tourist who doesn't want the fish-and-chips, pint-of-bitter, Premier-League-soccer type of holiday, offers a superb destination for a relaxing break.

Its main industry is agriculture, with many farms in the area, producing mainly fruit and potatoes, but also fine red wines. 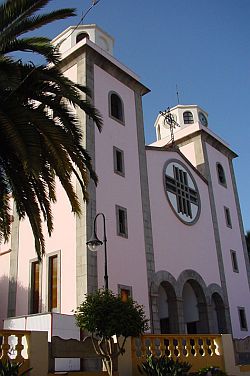 The town itself features all the things you may expect to find, but noteworthy is the church. After the original one was destroyed by fire in 1936, a new one was erected, featuring sculptures by celebrated Spanish scupltor, Mariano Benlliure. Another place of religious significance is the Hermitage of San Antonio Abad. If that wasn't enough, the Spanish newspaper El Dia reported in 2011 that plans were afoot to erect, in the Plaza El Salvador, a small building whose interior replicates exactly the Holy Sepulchre in Jerusalem. There are also plans for a copy of the Shroud of Turin to be placed inside it.

The town offers, for visitors, many natural areas of interest and features no less than 10 local walks.

As far as accommodation goes, there are several casas rurales, or rural houses, in the area, offering all amenities within a traditional setting.