The Myth of the Garden of
the Hesperides

With the Garden of the Hesperides, we're in the realm of Greek mythology. Some of these tales read like a soap opera!

The story begins with the giant called Atlas, you know, the bloke who's always depicted holding the world on his shoulders. (In an episode of "QI" once, this concept was shown to be false - he actually holds up the sky.) Anyway, he has to do this as punishment for something - either annoying Zeus or Perseus, it's not too clear. And he's doing this impressive holding-up feat somewhere beyond the Pillars of Hercules (Straits of Gibraltar). 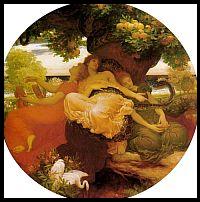 Altas's daughters on full alert
looking after the apples

Altas's daughters on full alert
looking after the apples

Now, Atlas had three daughters, who were called the "Hesperides" and they lived on a beautiful island somewhere in the Altantic Ocean, where the weather was always sunny and mild (do you see where this is leading?). This island contained a profusion of trees yielding golden apples, which the sisters looked after.

Next, enter Hercules (him with the Pillars), also known, in the Greek version, as Heracles. He was in the middle of performing his "twelve labours" (actually, he had nearly finished - he'd already done ten). For those of you who are not students of Greek mythology, these were twelve almost impossible tasks he'd been set by the king of the gods, Zeus, because he'd annoyed him in some complicated way. His latest one was to steal these Golden Apples!

There was one problem. He didn't just have to deal with three girls. There was a dragon, called Ladon, guarding these apples - not just any old dragon either, but one with 100 heads, breathing fire!

But, it turns out, Atlas knows this dragon, so Hercules goes to him (still holding up the sky, remember) and offers to look after this sky-holding-up business, if Altas will pop over and take some of those golden apples. 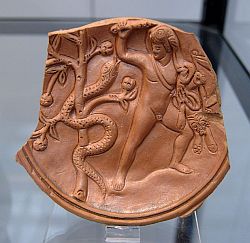 Atlas agrees (presumably glad to get the sky off his shoulders for a bit), goes to the sunny, mild island - let's call it...um...Tenerife, where the dragon recognises him and, therefore, doesn't attack him. Atlas repays this lack of aggression by promptly killing the many-headed beast and steals the apples. (The apples were subsequently given to the goddess Athena and she just gave them back to the Hesperides, so it was all a waste of time, then.)

It doesn't quite end there. When Ladon was slain, his blood fell all over the Garden of the Hesperides, where each drop sprouted a dragon tree. These dragon trees have enormous trunks, made of many wrap-around branches that are said to represent Ladon's hundred heads. When the bark is cut, it spills red sap, said to be Ladon's blood.