Candelaria - a place of pilgrimage

Situated on the east coast, not far south of Santa Cruz, Candelaria has, for many years, been a place of pilgrimage. 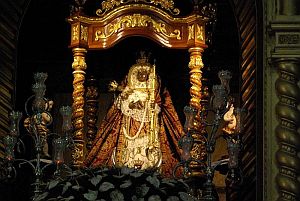 It started way back in the time of Tenerife's original inhabitants, the Guanches. In 1392, two of them, simple goatherds, discovered a statue of what looked like a black Madonna, washed up on the shore. One threw a stone at it, but his arm became paralysed. The other tried to stab it, but was forced to turn the knife on himself. Eventually, they tried touching the statue and, at once, the paralysis left the arm and the knife wound healed up.

Awed by the apparent powers of this statue, these two peasants told the Mencey (king) of Guimar, who had it taken and installed in a cave in the village.

This cave, named Achbinico, but also known as the Cave of San Blas, became the first Christian temple in the Canary Islands and Guanches were baptised there. It was soon a shrine for pilgrims, who would light candles and pray to the Virgin. 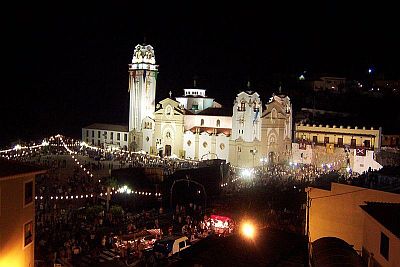 After the Spanish Conquest, a certain Don Pedro Fernandez de Lugo ordered the building of a Basilica, to house the religious icon in the splendour it deserved. This was realised in 1526. This original edifice was eventually destroyed by fire and had to be rebuilt in the 19th century and was large enough to accommodate 5,000 people. In 1826, a freak tidal wave swept the Black Madonna away, back to the sea. The present icon is a copy, made by Fernando Estévez.

Every year, Catholic pilgrims and tourists celebrate the Black Madonna of Candelaria with a festival. One of the highlights is a re-enactment of the Guanches discovering the statue washed up by the tide. This holy lady is also the patron saint of all the Canary Islands. 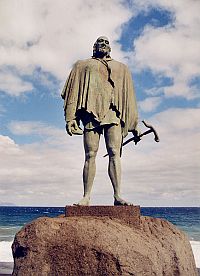 Next to the magnificent Basilica, you'll see a set of nine bronze statues, representing the nine Guanche leaders who were governing Tenerife at the time of the conquest.