Whilst there is the famous Cabildo de Tenerife building in the Plaza de España, Santa Cruz, housing the Council for the island, there is also, in that city, the building of the Parliament of the Canaries.

As you can see, it's a very modern-looking edifice and was only completed in its present form in the mid-1990s. Found on the Avenida José Manuel Guimerá in the island capital, it houses that branch of the Canarian Parliament presiding over Tenerife, La Gomera, La Palma and El Hierro.

The striking building was constructed from stone, metal and wood, plus imaginative use of volcanic material, in deference to the island's origins. 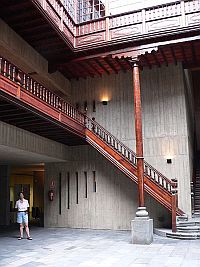 At its centre is an open courtyard, open to the public. There, you'll be able to see a beautiful, authentic Canarian balcony, of the sort found on many of the traditional houses.

Being rescued from an old stately home, it was installed as a further deference to the island's history.

The President of the Canarian Parliament