"Now in this island of Atlantis there existed a confederation of kings, of great and marvellous power, which held sway over all the island, and over many other islands also and parts of the continent". This was how the Greek philosopher, Plato, described this famous, enigmatic place in his work "Timeos and Critias". Nowadays, there are many thoeries about its location, but Plato, in the only ancient source that ever mentions it, placed it "beyond the pillars of Hercules", which was the Strait of Gibraltar, therefore somewhere in the Atlantic Ocean.

So, is Tenerife a candidate? Plato described a great continent, "larger than Libya and Asia together", populated by a people who, apparently, worshipped the god of the sea, Poseidon and, by all accounts, were very wealthy and the most advanced civilization on the planet at the time. Subsequently, as so often happens, they degenerated into a greedy, aggressive, war-like people and, eventually, the king of the gods, Zeus, took action to punish them. Overnight, the island was destroyed by an onslaught of tidal waves and volcanos. 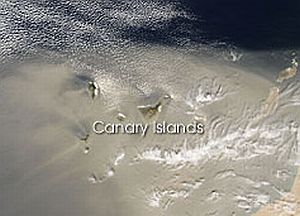 The tops of Atlantean mountains?

It is said that the peaks of Atlantean mountains today form the Canary Islands, the Azores, Madeira and Cape Verde. Such things as palaces and temples are waiting to be found at the bottom of the ocean. No-one has discovered them yet!

What do you think???


To read about this in more detail, check out the Wikipedia article.